During his time in Iraq he was lauded for response and control of personnel on BIAP (Baghdad International AirPort) during rocket attacks in location and helping find origins of launch. In addition to being chosen for security duties for visiting dignitaries to Baghdad and being awarded letters of outstanding performance of duty from the highest ranking enlisted person in Baghdad, Todd was personally given a certificate of commendation from the Security Forces commander for actions taken under fire. (4 awarded out of 400 personnel)

Using the words high-energy to describe Todd would not be an overstatement. Although the caption in the photo below reads that Todd is taking cover (That’s him on the right, taken during his time in the Air Force), it’s clear to see that even while “taking cover” he remains in motion! 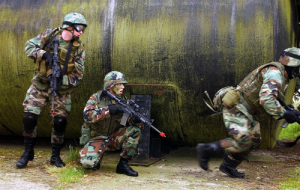